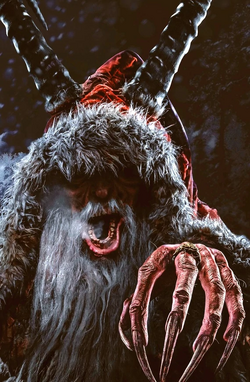 Krampus is the titular character and main antagonist of the movie Krampus. He is an ancient demon who is the "shadow of Saint Nicholas".

Krampus appears as a monstrous, hunch-backed creature that bears cloven, goat-like hooves, a pair of large, curving goat-like horns. He seems to have a stern, worn face that resembles Santa Claus.

Unlike Santa, Krampus is, as stated by Omi, "a much darker, more ancient spirit". He is a malevolent being who punishes those who lose their Christmas spirit. Krampus punishes non-believers by first tormenting and terrifying them with the aid of his helpers, which consist of evil living toys and dark Elves. He then picks them off one by one, sending them to the underworld; however, he can be merciful: for those that he chooses to spare, he lets them off with a stern warning that he will be watching. 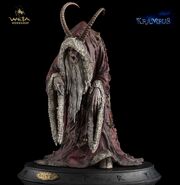 Krampus in the Comic