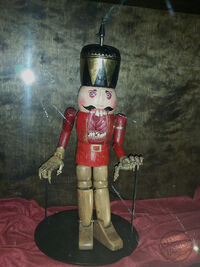 Nutcracker, also known as the Soldier, is a supporting antagonist of the Christmas comedy-horror film Krampus and is played by a puppet. It is a demonic nutcracker who, along with a smaller version of Der Klown and several other toys, is responsible for killing Omi by pulling her into Krampus's bag. Hes also seen opening his mouth

Although Nutcracker does not do much in the movie. He is only seen in 2 scenes, Nutcracker is first seen in Krampus bag for a split second and also seen in the very end in the top far right of the screen when all the monsters jumpscare the screen, so not much personality is shown.