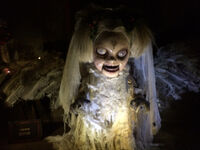 Perchta, also known as the Cherub or the Angel, is a supporting antagonist of the Christmas comedy-horror film Krampus and is portrayed by an animatronic/rod puppet and voiced by Ivy George. She is a crazy, gross and demonic puppet-like creature with tattoos embedded on her face and bulging eyes.

Perchta doesn't display much of a personality in her few moments of screen time. But she does seem to be demonic and bloodthirsty, for she was trying to attack Sarah before being killed by Aunt Dorothy.

Perchta is named after the Krampus-like Holiday character of Frau Perchta. In her respective folklore, Perchta is a sorceress who lives in the mountains and who hunts down naughty children to disembowel with her silver knife. She also has a large number of demonic followers who resemble the Krampus known as the Perchten or Straggele which tear naughty children apart and who can turn invisible. It is believed that the character of Perchta was originally a Germanic (or Celtic) goddess affiliated with the Winter Solstice and the mountains. 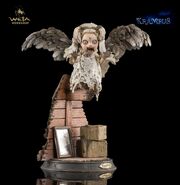