Edit
watch 01:36
We're Getting Mutants in the MCU - The Loop
Do you like this video?
Play Sound
Teddy Klaue 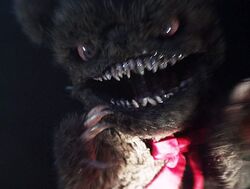 Teddy Klaue, also known as the Teddy Bear or Teddy claw, is a supporting antagonist of the Christmas comedy-horror film Krampus and is portrayed by a hand puppet. He is a ravenous demonic teddy bear that attacks Linda in the attic.

Teddy Klaue doesn't display much of a personality in his few moments of screen-time, but he appears to be extremely fast, ravenous, tough, powerful, aggressive, ferocious and sadistic. After first attacking and biting linda in the attic, he is later shot by Aunt Dorothy in the living room before the elves storm the house. 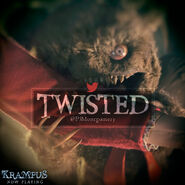