Edit
watch 01:36
We're Getting Mutants in the MCU - The Loop
Do you like this video?
Play Sound
Tik Tok 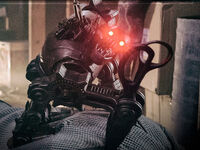 Tik Tok , also known as The Robot is a supporting antagonist of the Christmas comedy-horror film Krampus and is portrayed by an animatronic robot. It is a fierce-looking wind-up robot wielding a pair of scissors who attacks Tom in the attic. It is later destroyed by Sarah. Also he is the only one that do not come from the roof to attack from the others( Teddy Klaue,Cherub,Der Klown)

Tik Tok doesn't display much of a personality in its few moments of screen-time, but it is very aggressive and quick, thanks to its small size.

Tik Tok behind the scenes
Community content is available under CC-BY-SA unless otherwise noted.
Advertisement