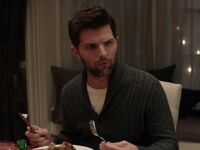 Tom, also referred to as Tommy, is one of the main protagonists of the Christmas comedy-horror film Krampus and is played by Adam Scott. He is the husband of Sarah, the father of Max and Beth, and the son of Omi.

Tom appears to be a bit more level-headed than his wife and tries his best to keep his cool during the family dinner, despite the constant chaos around him. He is quick to take charge and protect his dysfunctional family at the slightest hint of danger. He tries to be a good father to his son and even tries to cheer him up after the fight at the dinner table.

Tom's fate is to be pulled underneath the snow by the Snow Beast.